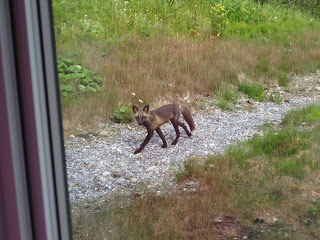 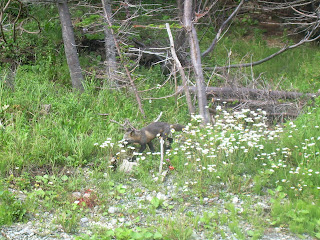 A Labrador literacy education and a tale of an astronaut

So, this morning began slowly, with a bit of reading as there was a bit of rain. The reading got punctuated by a visit from our friend Dennis, who lives up the road. We set ourselves up with coffee and settled back for a chat. After a short time the conversation turned to fishing and Dennis mentioned how he had done his first serious employed fishing work at the age of 12, and up in Labrador.

His father was a carpenter and was building a house over this side of Newfoundland, in Steady Brook just out of Corner Brook, Newfoundland's main western town. He had arranged for Dennis' older brother (14) to go up to Labrador for the summer (and some of the fall) to work with family members doing the summer fishery there. In Corner Brook they went to the wharf to put the brother on the schooner (ticket all bought), and at the very last minute the brother said he did not want to go. Dennis immediately volunteered to go and, with the ticket bought, his father agreed.

This is one of those stories of a kind Ivan Illich used to revel in, of an age when young people were still allowed to be full people and not over-protected and forced to be 'children'. Dennis went and quickly settled into the work. sleeping in quarters with other workers, one of whom was a Labradorean Inuit man 30 years Dennis' senior. The two used to talk a lot and Dennis would ask his new friend about his life, its riches and its troughs. "Do you have any regrets?", our 12 year old asked him. Just one, replied the older man. I never learned to read or write and it tears me apart. When I sign my name I have to use an X".

This (in the mid-late 60s) was still the time of the great Newfoundland fishery, where merchants and their company stores made fortunes and the fisherman struggled to break even despite catching plenty of fish. The fishermen would get credit from the store over the period of the fishing and then settle up at the end of the season, getting whatever the difference was between their total catch and what they owed the company store.

Immediately Dennis heard the man say he could not read (early in June) he went and found an old exercise book and got a reading primer called "Tom's Dog". He started teaching his friend the alphabet and, in short order, how to read. Dennis explained that his own spelling was pretty bad, but the reader could be trusted, and before long his older friend was reading books. Dennis said "He learned fast. It was easy. In no time he was reading Tom Sawyer and he was writing.

In early October at the end of the season it was time for squaring up. They went to the merchant's store to settle the bill. Dennis' friend asked to see his bill, for the first time. This surprised the merchant, because it had never happened before. The man read his bill and pointing to an item said "I never bought this". 'This' it turned out, was a large cheese -- the kind of thing you'd know if you'd bought. In this case it was never an option because the man hated cheese. The merchant asked how he knew he hadn't bought that item if he couldn't read. "But I can read now", said the man, and this says 'cheeese' and I never bought any.

"Now I'll sign", said the man, and he signed in full. He would never overpay again.

Dennis stayed in touch with this man for 40 years after that, the latter dying 6 or so years back.

After we'd digested that story we were ready for more. From a carpenter (Dennis eventually finished his schooling past the age of 20 once he'd made up all the time lost during extended summers of fishing. Needless to say, he went back fishing subsequent summers), Dennis became a successful business person thanks, in no small measure, to the kind of initiative evident in teaching his friend to read. He told of how his grandmother explained all the uses of baking powder, from using in a fire extinguisher to using for cleaning glass. In his mid 20s, Dennis found himself employed in maintaining paper mills and their machinery. He would sandblast factories for painting and would clean equipment, some of which involved glass rollers that had to be pristine to do their work.

He put his sandblaster together with his memory of his grandmother cleaning glass with baking soda and wondered if sandblasting baking soda would work on the glass rollers. Seems like it worked a treat. Dennis quickly began designing, building and patenting machines that would use baking soda for cleaning. Time went on and success grew. Dennis decided to audit some papers in small business degrees at York University. Teachers there took a keen interest in his life and successes, wondering why he wanted to learn about business when he was already such a successful entrepreneur. Eventually, captivated by his life stories as much as we are -- we're hooked -- one lecturer asked if he would be prepared to do some talks based on his experiences. Dennis agreed and went on to speak in many places on topics he was well grounded in.

He said that probably the toughest and scariest talk he accepted an invitation to do was for one of the major companies producing baking soda/powder products. He didn't want to do it, so put in a fee he was sure could only be declined. It wasn't. So Dennis went down and did the talk. "How did it go?", asked Michele. "Oh, it went fine," replied Dennis. "I wasn't the main speaker. That was John Glenn, the astronaut".

During the seminar he got the opportunity to talk with Glenn, who he really liked. Dennis, who enjoys a challenge, was amazed to have the chance to talk with a space pioneer and had plenty of questions. But the one question he most wanted to ask of John Glenn was "so when you were up there headed for outer space, what on earth was going through your head? What were you thinking about.

Dennis could hardly get Glenn's response out for having to stifle chuckles. Glenn said "You know, the thing I kept thinking about the most was that this thing I am traveling in has been built by the lowest bidder".

The business world certainly throws up some great tales.