Loads of congratulations to Eduardo Junquiera and Marcelo Buzato for their new book in our New Literacies series titled: New Literacies, New Agencies? A Brazilan Perspective on Mindsets, Digital Practices and Tools for Social Action in and out of School (New York, Peter Lang).


From students as teachers’ pets to teachers as Second Life avatars, or from being ridiculed for not knowing your syntax to ridiculing others through multimodal remixing, something has changed in the way people are acting and being acted upon through literacies. From parallel text processing «under a cloud» to text-as-process enhanced by cloud computing, or from one laptop per child to several laptops left behind by children in creative spoken interaction, learners and educators’ actions through and around texts and technologies provide quite a telling example of such changes. From writing as technology to blogging as a tool for fostering critical mindsets within complexity, or from automatized knowledge acquisition routines to new forms of relating to knowledge and new perspectives on autonomy, social ordering and Self constitutional processes defy binaries such as agent/structure, global/local, social/technical, virtual/real, or even human/non-human. In this volume a team of scholars from some of the most prestigious Brazilian universities address these issues, and illustrate them with findings from research on the interplay between new literacies, digital technologies and social action in and out-of-school. The chapters introduce, or revisit, an array of theoretical constructs from education, sociology, linguistics and media studies, while presenting a new inside perspective about how research on new literacies is being carried out in Brazil. Altogether, they provide a very useful set of ideas, tools and analytical frameworks for researchers, teachers, and students of Education, Language and Arts and Communication worldwide, especially those concerned with technology-enhanced education and social inclusion.

This is a wonderful summary of a range of initiatives in Brazil associated with digitising classroom learning and an excellent introduction to English-language speakers to the important work currently underway in Brazil in relation to new literacies and digital technologies. Congratulations all 'round to Eduardo and Marcelo! 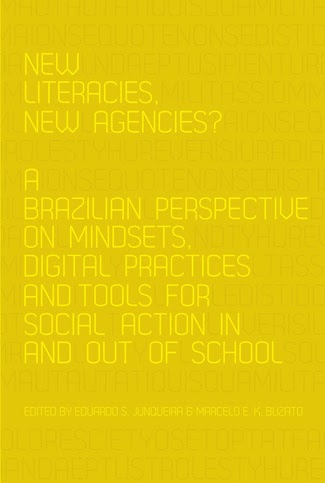 Comments:
I really loved reading your blog. I also found your posts very interesting. In fact after reading, I had to go show it to my friend and he ejoyed it as well!

Really decent post. I have been checking out a few of your blogs and I love your this good stuff. Keep sharing. Eminem, also known as Marshall Mathers, is one of the most commercially successful rappers of all time, with more than 100 million albums sold worldwide. He is one of the richest rappers in the world, with an estimated net worth of $210 million. Visit Eminem net worth for more information.