A couple of days I read a story in the New Zealand Herald online about a motivational speaker making a trip to the US and wondering if she could avoid lugging a laptop and, instead, settle for taking her mehPad. The story is the kind of thing that spawns Kiwi Jokes across the Tasman Sea, but it is instructive and can be found here.

The author wanted to work on some serious writing whilst OS and had done some prior preparation -- she'd loaded some material to be worked on to google docs -- and had carried a $140 keyboard custom manufactured for the tablet to get the keying work done. But it had all come rather unstuck. She discovered she couldn't work with google docs offline, and the hotel internet was so slow it precluded working effectively online. Frustrated by the experience the author advocates traveling with a laptop to avoid this kind of inconvenience.

What is sad-funny/funny-sad here, from my perspective, is how easy it is to overpay for something that can be got so very much cheaper and may, in fact, work a whole lot better.

Which brings me to yesterday.

Michele had kindly bought me a bunch of music and stored it on her Amazon Cloud for me to pull down. Yesterday was the day. The internet is pretty narrow band here at the apartment in Mexico City, even though I am on a so-called high speed connection. Just not enough pipe. It's north of dial up, but a lot of the time if you can download a meg a minute it is as much as you can hope for.

So I was into the downloading. I had the high gain aerial booster running on the machine, so I was getting the optimal signal possible. I could not afford to just dedicate the internet to music downloading, however, because I had a lot of emailing to get done. Yet I could not get another web site to open on the machine. Nor could I get email to open on my Chromebook, which is usually pretty ecological when it comes to bandwidth. The music was taking it all.

I tried my last shot, the Nexus 7 tablet with its email apps. Bingo. There was just enough to pull it down. The trouble was that some of the urgent emailing called for serious keying -- not the touch screen keyboard stuff. Even with the brilliant spelling and grammar anticipation of the Nexus -- remember we are talking a machine whose 8 gig version retails for $199 here, and that runs andoid (which the mehPad people are trying to litigate out of viability, and it is not so hard to see why) -- the keying was a pain in the nethers.

As it happens I had an old USB keyboard lying around, a raggy thing that had cost maybe $10 a decade ago. I popped the usb adapter into the Nexus and hitched up the old keyboard. I was flying. Instant sync, no problems. I hammered away getting the work done, and another workaround was achieved -- very economically.

Of course, there is a whole lot more that pertains directly to the experience of the NZ author of the woes depicted earlier. For example, the $2.99 Office app that enables you to word process, create presentations and create spreadsheets off line. And that you simply upload into Google Docs as and when you want to and have an internet connection. Plus, as I mentioned a week or two back, the same usb connectivity (with a $2 adapter) lets you plug in a thumbdrive or a card slipped into a usb adapter and access documents and/or stream music and video. The app for accessing the files on the external drive costs another $2.99.

So, last night I began wondering just how far could I push this Nexus toward an approximation to most of the computing I do? This is how it looked. 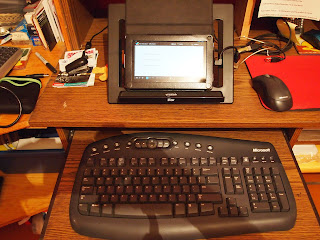 Basically, I had sat the Nexus on the laptop riser on my desk. Behind the riser lurks a powered USB hub -- just a small, light, simple hub with 4 usb ports. I plugged that into the adapter running from the Nexus. One port supports the wireless mouse and wireless keyboard. Another takes the thumbdrive that lets me access all manner of files. If I don't want to run bluetooth speakers I can just jack wired speakers into the Nexus (which I did after taking this photo, but enough tomfoolery is enough). That still leaves 2 usb ports .....

That basic Android Nexus 7 tablet with $6 of apps and a $2 usb connector does everything and more that the author in our story required, for around 25% of the cost of the mehPad and exhoritant keyboard. If traveling I am sure it'd be easy to borrow a usb keyboard from a hotel if you didn't want to carry one. Of course, for $35 you can have the bluetooth keyboard in a leather stand case that you'd carry the Nexus in anyway, when traveling. That would leave the adapter free to take a mouse if you so wanted.

And if you wanted to go the whole hog, you'd just drop a small, lightweight, powered USB hub into your carry on, and you have all you need for computing life-on-the-road for a diverse range of purposes.

That alone would hook me on android.