Among the things I love most about our getaway place in Newfoundland is its relatively unmediated state: there's no landline, no cable, no internet and, best of all, there is no mobile phone access within 20 kilometers. It is like a small liberation to be able to get out and about without seeing people everywhere with their heads buried in a phone and, especially, to be free from being hostaged to conversations I have less than no interest in having forced through my ears. I feel blessed having another full month of such liberation at this time of the year. Of course, there'll be a massive culture shock returning to Mexico which, I suspect, is mobile phone culture at pretty much its worst. It's not for nothing that Sr Carlos Slim, owner of Telmex/Telcel, is currently listed as the world's richest man (or thereabouts).

On the other hand, I do need at least some communication access to the outside world -- and pretty much on a daily basis. While I am here life, in a larger sense than landscaping the perimeter of our land and doing routine maintenance on the cottage and barn, goes on. Students have evolving tasks unfolding on google docs, there are book proposals to process for our series, and family and friends to keep in touch with. Less, to be sure, in my case than if I were tethered to social media -- but I am not.

Maintaining contact with the world beyond, as well as keeping up with a fair bit of local stuff on a daily basis, is enabled by the Lark Harbour Public Library -- a warm, convivial, expansive wee space, located 2.7 kilometers back down the road toward town. Integrated into the St James School building, it maintains generous public hours during the working week, including two evenings when it is open until 9pm. The library is a CAP site -- CAP being the Community (internet) Access Program maintained across Newfoundland by the provincial government. There is a small bank of networked desktop computers down one end, as well as wireless access, which can easily be availed from the carpark after hours. Most days after school there are at least a few students accessing the machines, and during the summer months it's common to find tourists in there sending into the ether the photos they have taken of the physical beauty around here along with their thoughts about it all. And during the evening sessions a handful of locals drop in, mostly to return books and get new books out, and to have a chat with Lesley, a community librarian with a manner that is as expansive and welcoming as the library itself is. This wee space has become my "home away from home" up here, and I wile away many happy (and productive) hours down there. There is something close to wonderful about making it through the door out of the snow, sleet, or chilling wind and rain of Newfoundland's late fall and summer, and into the warm calm of the library.

There is a great magazine rack, an excellent section of books by and about Newfoundland and Newfoundlanders, as well as ample general reading fare, plus the internet, and good company. 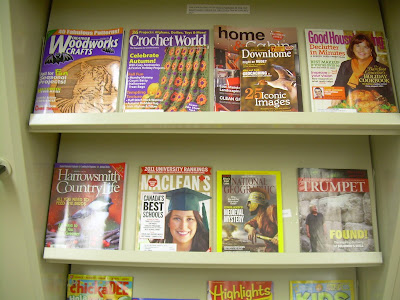 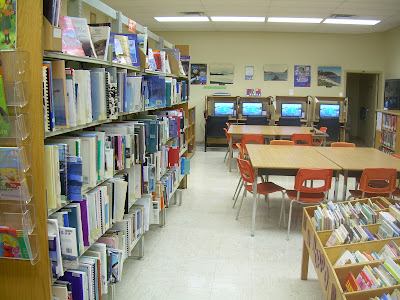 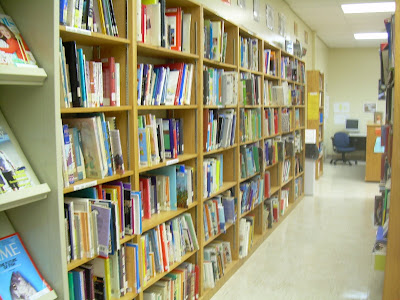 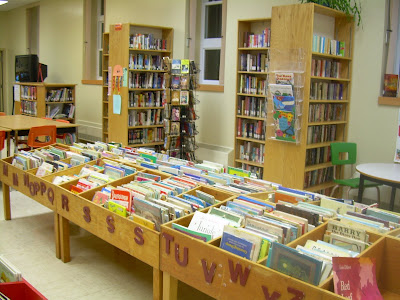 Supply and demand of resources are in good balance, and when demand exceeds supply on the computers a time limit arrangement works amicably ad efficiently. "The library" has now come full circle for me. As kids we used to frequent the Stoke Public Library, back in New Zealand, browsing shelves, taking our time, and always coming back with some book or other which would be devoured with pleasure and a sense of personal expansion over a few days and then returned for another spin of the dice. That library faded somewhat for me during adolescence, when summer and winter sports and a newspaper round (to fund the sporting interests) usurped my leisure hours. Of course, by then there was also the burden of qualifying scholastic exams, and when there still were library excursions they were typically for more utilitarian and -- frequently -- alienated purposes than my earlier experiences.

Then, following that, for decades, there were successive university libraries -- places I went to raid in search of stuff to get me through assignments and exams and, subsequently, through the regime of "publish or perish". I have always envied colleagues who were born (to be) academics. I think of them as being able to go to the (university) library to get resources they would read and reflect upon in a way likely not *too* different from the quality of reading and reflecting experiences I had as a pre-adolescent back in Stoke. Unfortunately, for me, academic life never came naturally. I had a sustaining curiosity about the social phenomena I researched and, in time, wrote about. But it always felt like *work* much more than pleasure. There wasn't a lot of serious *fun* to it. It was always more like a challenge to be met than a pleasure to be enjoyed naturally -- which is not to imply that pleasure is never a challenge. It can be, and often is. But for me academic work was largely challenge; I rarely recall a sense of pleasure in the doing of it. It never came easily and, especially after the 80s, I found myself working on topics and tasks that seemed to be aligned more toward "market forces" than liberally chosen topics of interest. Some of my closest academic friends and colleagues did considerably better in striking a resonance between their work as academics and their "real selves" than I managed. I used to observe them with admiration (and a little envy) wondering how they managed to end up shaping their working lives into such an apparently natural extension of "their real selves". Bless them. But I never learned their art.

Now, however, with the most of the *werk* and writing behind me, I am finding *reading* again -- online, offline, virtual and material. Books and reading on devices. Reading for its own sake. Reading, out of the wind and snow, in the convivial warmth of the Lark Harbour Public Library, whatever it is that takes my fancy. I feel like the kid who has found the candy tree. It's like the most outrageous privilege has fallen on my head. Like all the christmas presents came at once.

Like untirement has arrived and I have at least a bit of a notion of what to do with it. Like what literacies were created for at their liberal expansive best.

I feel like such a chump for having lost so much of it for so long. But it surely is nice to have some of it back. And what better to mediate it than the Lark Harbour Public Library? It feels right.

Comments:
Public libraries are the kitchen tables of a community. I worked part-time for a Toronto library during high school and university years. It's where you went to find out stuff for yourself, before there was Google. A quiet place in a busy neighbourhood. Always something new to learn and someone new to meet. Loved the regulars too. A librarian who knows the needs of the community is a treasure. So much thought goes into book displays and library programs.
We're fighting to save libraries in Toronto and such a strong response from the citizens it is!
I had such beautiful memories of my childhood experiences at the Bloor/Gladstone branch while reading your post.

I'm puzzled with lots of exercises. I was afraid I could not do the right time despite my hard work. I need a support person.
http://run3play.com