Refurbishing the well: design and execution

When we bought our coffee land, the real estate man, Gabriel, from whom we bought it, had dug a "well" on the common land shared by the three lots. He'd simply dug a hole on the line of a spring and it filled with water -- enough for watering plants, mixing concrete, etc. However, the walls would cave in from time to time, and the well would silt up. It would have leaves and twigs and small bits of branch from nearby trees floating on the surface. It served well for 5 years, but now that we are putting proper gardens in and wanting to get some turf down and make a nice outdoor living space, it was time to refurbish the well -- to find a way of keeping it clean, to give it proper walls and a cover, and to make something that was easy to clean.

We thought long and hard about how to do it, and eventually came up with the idea of using one of the large plastic water tanks that are on top of almost every house here: invert the tank, sit it on a bed of clean stones, drill holes in the sides and the bottom of the plastic (which was really the tapered top of the original water tank), and fill all around the outside of the tank with clean rock, providing a filter between the earth sides of the well shaft and the outside of the plastic tank.

Basically, the job would involved emptying the existing well and digging it much deeper, so we could have a relatively narrow and deep well interior. A couple of days ago we began the work, assisted by our neighbour, David, who we pay to do a fair bit of work with us, especially in the seasons where there is not a lot of other work available for day labourers. David had never dug a well before, and neither had we. And no matter how much we'd tried to explain the concept of the inverted tank he just didn't get it.

After all, no one builds a well like that.

David suggested to Michele that he had no idea whether it would work or not, but he was prepared to dig on, in faith that it might. Good faith, because it was a hot day.

The hardest part was always going to be digging out -- clay -- as fast as possible to keep ahead of the incoming water. There was so much silt in the well we would sink almost to the top of our  long rubber boots and then need to get help from the other to get free. Eventually, I figured we could use some timber to stand on, and we had a few lengths of stout timber around a meter or so long, and they proved to be excellent static surf boards from which to excavate.

So we got started by draining the original well. 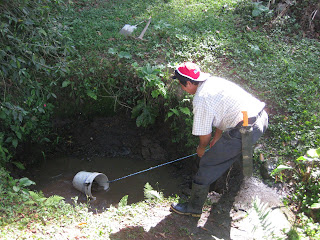 And then we got digging. 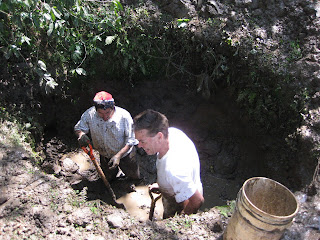 Eventually, but nowhere as soon as we'd have preferred, we had gone down far enough. 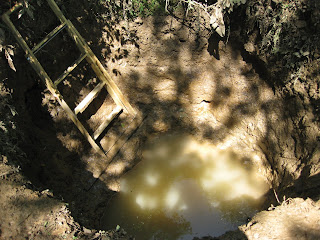 At that point, David went home for lunch, and Michele, who had started drilling the holes in the tank with the cordless drill, had to head back to the house (4 kms away), where there is electricity, to recharge it. Meanwhile, I fell back on a hand operated brace and bit, equipped with a sharp auger. Much slower than the drill, but invaluable. The recharged drill got us to within a hundred holes of so, and a second round with the brace and bit finished the job. 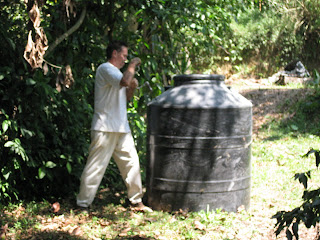 It was then time to start loading the clean rock into the base in readiness for loading in the tank -- upside down. Jose Alberto had finished school for the day and came to lend a hand with the rock filling. 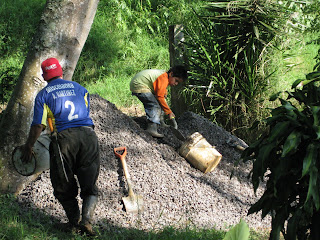 With the tank in place and the rock filled around the sides, the well looked like this. 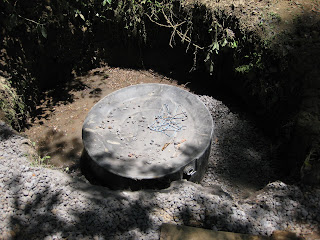 It was time to cut out the original base of the tank, which is now the top of the well, after which we would know if the design had worked. That was a job for a simple fine-toothed hand saw. 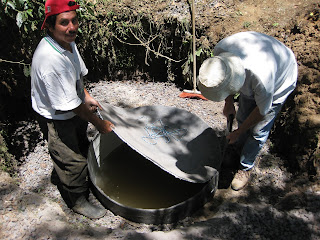 It was fantastic to see the water there, much cleaner than previously, and ready for using. 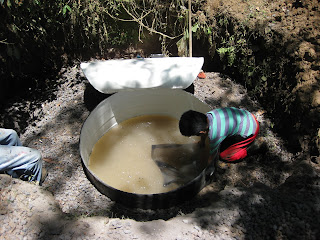 This was the first phase of the well completed. The next job, just begun, will involve putting a concrete block rim reaching above the top of the plastic walls of the well, removing the remainder of the plastic base, and building a nice strong cover for the top of the well. It will also involve concrete blocking the earth walls above the level of the well, and putting some simple steps in for getting comfortably down to the well from the surrounding ground. That will take a few days, but it  is already clear that the end result will be worth it. And once the well has been drained a couple of times the water should start coming through even cleaner.

Comments:
Jose looks like he's done it before or did you just teach him well. Looks like a real good worker for a young chap.

Really interesting and neat to see it.

Jose has picked it up all from his Dad and the local culture. He has all the same "ways" of doing things -- carrying buckets on his shoulder, how to get the bucket up to his shoulder. All acquired by imitation from elders. Same with his sisters using brooms.