We've got to the auditorium in good time for the opening keynote of the conference, by Daniel Cassany, from the Universitat Pompeu Fabra, Barcelona. Daniel is Catalan, which gives us a nice point of connection since some of our work has been translated into Catalan.

Unlike us, Daniel is an expert on writing, so we should be in for a good show as he takes up the theme "Internet 3; School 0: Learning about what young people do outside of school".

Meanwhile, we've been negotiating arrangements for data projection for our own talks. This will be a little complicated, since there is no cable to run from a computer on stage to the projector, and the slideshow is not in the least linear. The arrangement at this point is that I will be Michele on the stage and Michele will speak from the projection point and run the Mac.

Next time we'll be linear.

So now they are introducing the officials and the keynote speakers. It's very flash, with lovely flowers on the stage and a beautiful auditorium.

From here we'll go to the book launch, which should be fun. It was nice to see our book on display, since it's a work we are very close to and that gave us a lot of fun in writing, and that has treated us extremely well since it was first published in 2006.

Alma Carrasco is opening the conference and we'll try to upload some pix. The light is a bit low, but they'll give a sense of the scene. 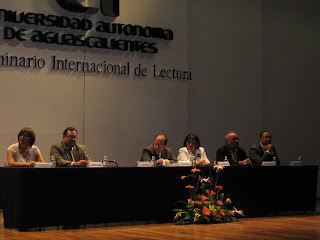 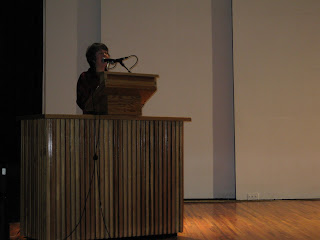 Daniel has been introduced and is now getting under way. He's referred to a very influential book about street maths in which the kids are 10 in life and 0 in the school. He's spelling out the findings from Nunes, Schliemann and Callaher's book as a prelude to the 3 cases he is going to talk about.

Michele is keying flat out, so we'll be mixing and matching this post as we go along. Meanwhile, it is surprisingly pleasant to be following the talk pretty well in Spanish. Academic Spanish is certainly much easier for me to "get" than conversational Spanish. I guess that reverses Daniel's order, since for me, at least, it's looking like School 3, Life 0. 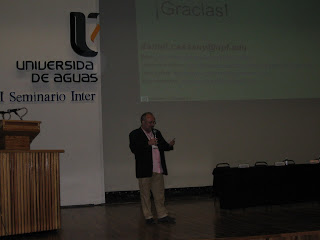 Daniel opens by discussing the title of his talk, and emphasizing it’s not to do with soccer, but to do with a book published in Brazil, called “Na vida dex, na escola zero”.

He explains he’s going to talk about a group of three young people who wanted to attend university, but two of whom couldn’t because of problems they had with reading and writing. He signals that these young people used the internet to teach themselves really sophisticated things that many adults have no idea even exist.

The first young women is Ari-chan—she has a number of blogs, spends about 3 hours a day on the internet. She translates a range of texts from Enlgish into Catalan—but has failed to pass the entrance exam to undergraduate degree twice and is about to try again.

The second young woman is Simbelmyne (umlaut over final e). She is into fanfic.

Arnau is a reader with difficulties in terms of reading academic texts. He currently works as a kind of barista en in Barcelona. He’s a sports fanatic and reads every magazine he can get his hands on.

After this introduction, he begins to talk about the text that provoked his talk and which focusses on ethnomathematics, or, more specifically, on studies of street maths (the kind that takes place in fruit stalls etc.). Children learn to multiply numbers informally by means of playing with numbers and money, by serving customers and needing to calculate final costs etc. The contexts for this kind of learning include life (e.g., children of fruit stall owners, of carpenters, and in school. He talks about the difference in experience between life and school for these children. That maths in every life for these children is socially relevant, grounded in every practice, interactive in terms of spoken language, and shaped by personal strategies developed to calculate numbers. There is a real emphasis on practical, everyday knowledge. But in school, there is a gap between maths and it’s social use. They are expected to talk about maths in a very abstract and abstracted way. Maths involves a lot of reading etc. there is a lot of technical practice rather than practical application.

Ari-chan is 21 years old and has a friend in the UPF. She’s a serious fan of “Tokio Hotel”—a popular German band. She has a German boyfriend and is very social. She has two photologs – one is personal, and is group-oriented. She posts every day: a photo and a caption in Spanish. Friends comment on these posts and she responds. She is active on the forum, “Neolitera”—she has a space there where she posts her stories. She translates the lyrics of Tokyo Hotel from English for posting on her photoblog. She uses online translators for her translation work. She failed her Spanish and Latin exams as part of the entrance application to the university, but it’s never occurred to her to use online translators to help her study Spanish or Latin. She can write in Catalan and Spanish. She can also use the language of the internet—chat language, text language. She is adept at using language colloquially and formally. As such, she can be said to be fluent in 3 languages.

She likes to write narratives that she calls “realistic history”—that is alter-identities for Tokio Hotel band members. This is a genre whose name she has developed herself to describe the kinds of texts she writes. Daniel makes reference to Charles Dickens’ and his serial publication of stories over time and compares this practice to how Ari_chan adds chapters to her stories posted to Neolitera. For Ari-_chan, writing this stories isn’t only about reading and writing stories per se, but about establishing and maintaining social relationships with others who share her passion for writing about things important to her.

But, despite all this, she’s not interested in academic reading or writing. She doesn’t use online resources to help her complete/study for academic tasks. Ari-chan herself believes her failure to pass her entrance exam is the fault of her friends or of the whims of the professors evaluating her entrance exams. Ari_chan is highly literate online in ways many adults aren’t: blogs, writing with photos, translating texts etc.

Simbelmyne is 21 and a fourth year student in the UPF. “Simbelmyne” is the name of a flower in the Lord of the Rings saga. She is an avid fanfic writer (Harry Potter fiction). Some of her narratives run to 70 pages of text. http://harrypottercat.cat. There is a well-defined world of fan fic writing—and Harry Potter fanfic writing in particular—in Spain. For example, “Harriet Potter”—where Harry becomes a girl and has additional/new adventures. Simbelmyne also creates photo montajes—such as of photos of characters from the Mexican telenovela “Rebelde”.

Daniel then presents an interesting comparison of Ari-chan and Simbelmyne.

Simbelmyne didn’t care for reading until her mother read to her the entire set of Harry Potter books, and then she was hooked. She read and writes a range of genres: fan fiction, realistic histories, uses Facebook and has a bog and photolog. She uses the resources available to her to reach her objectives, and to make links between identity and relationships with others. For her, reading and writing are not ends in themselves, but tools or the results of her interests in relating to the group of fanfic writers with whom she associates.

She is very well aware of linguistic diversity in her own reading and writing and speaking practices. She speaks different languages, as well as in different registers.

Arnau is 17 years old. He is a fan of “Barca” (Barcelona's soccer team). He left school and wasn't interested in going to university. He currently works in a coffee shop in the city. He identifies as having difficulties with reading. Arnau explains that “I’m an intelligent person, even though I can’t read.” He did repeat a grade at school, but abandoned his studies again; he is about to try again to please his mother, who is quite ill. He spends his time chatting online, emailing—about 2 hours a day. He likes to visit his grandmother who lives in a seniors’ residence—mainly so that he can read the sports magazines they have available there. When his mother fell ill, he spent a lot of time reading to her. He ultimately would like to be a sports reporter.

He and his girlfriend write a collaborative blog about their everyday lives, and about their relationship. Arnau has a great capacity to find strategies for overcoming challenges presented to him by his reading difficulties. These include strategies for avoiding reading—especially avoiding academic reading. He searches online for video clips related to texts he’s meant to read for his studies; he obtains exam questions beforehand. Daniel argues that Arnau sees books in terms of content to be known and so that he can represent himself as a reader to others (e.g., Arnau explains “Now I know “Don Quioxte”). For Arnau, academic reading is an individual task, focused on books and textbooks. His sports reading though, is much roe organic and shared with others.

To synthesise: all three are very internet literate but only Simbl. has been able to enter into university studies. Ari_chan and Arnau are considered to have problems with literacy according to “school” definitions. Daniel explains that the internet has facilitated Ari_chan’s and Arnau’s development as literate beings, but that schools have failed them.

These three cases aren’t generalisable, but there is still a lot to be learned from each. They draw attention to the vernacular literacy practices (both analogue and digital) that young people engage in. all three young people connect the texts they read and write to their world, to their identity and to their relationships with others. They engage in a range of collaborative reading and writing tasks—and this is rarely allowed to occur in universities.

Comments:
Hi, Colin and Michele,
Very nice post about my talk. Thank you for it and for the pics... They are great!!!!

Thanks for sharing this. I'm writing my dissertation about students who are labeled as "struggling readers" in school who are simultaneously successful readers in electronic venues and this was a great perspective to see.