I was working away building some cupboard space in the barn up here at Bottle Cove this morning when I suddenly realised that getting the large sheets of plywood for bracing the walls on the small addition we are currently making to the cottage was not the only challenge to be resolved, so far as transporting the building materials from the city is concerned.

The thing is that Bottle Cove is a long hike from the hardware supply stores in the city. Arranging transport is a drag, partly because costs are high, but also because you have to wait until the next truck is coming out this way. In these circumstances, the dearly loved Mustang is a considerably less than an optimal solution. Well, that is not strictly fair. There is, of course, the “in principle” possible option of fitting a tow bar to the car and using a trailer. But for reasons that will remain unspecified here, that is strictly an “in principle” possibility. In practice, the possibility simply does not exist.

The challenge of transporting large sheets of plywood was resolved yesterday when Lawrence, our builder friend, replied positively to my query of whether it would be OK to cut the sheets in half long ways. That way could slide through the space between the trunk (or boot, as it used to be) and the folded down rear seats. By the time they pushed up against the driver and passenger seats there would be less than a metre of length hanging out the back. By the time they were bound securely together with plastic film from the roll provided by the store (think: 20 metres of Glad Wrap wound round and round the load), and the trunk cover pulled down over the protrusion as far as possible, and held there by rope running from the spoiler under the load and back to the other side of the spoiler, repeated multiple times, we'd be reasonably good to go.

So far so good. But we had forgotten the door, hadn't we? The 32 inch wide door that comes in a wooden frame. Unlike the plywood, it cannot be cut down the middle.

In a “senior” moment I had forgotten about the frame. The door itself, at just 32 inches, would not be a problem, I thought, because the gap between the trunk and the seats is close to 33 inches wide. So the door alone would fit much the same as 4 lengths of half-width plywood. Jackpot. At that, we could get the various lengths of 2 inch by 6 inch timber needed for the job(8 foot lengths) as well. They could sit under the door and give it something nice to lie on.

With this naive faith to guide us—having forgotten about the frame—we headed for the city and the store, and made the purchase in the shop. On the way in we had been delighted by a typical instance of local creativity. As we approached Frenchman's Bay Michele exclaimed: “Is that someone water skiing? Why, yes it is. That's a first. They must be freezing!!” The brute fact is that the Humber Arm is almost as cold in summer as it is in winter. Well, there might be 10 degrees or so in it, but that's not a lot when you consider that for the winter months the Arm is frozen.

The initial exclamation was quickly followed by two statements of extreme delight. “Hang on, that's not a fishing dory towing the skier, is it?” Sure enough, it was. And second: “It's OK, they're in a wet suit. Mind you, they'll still be freezing”.

Now, we've seen some fishing dories moving at pretty good rates before, but this one was fairly screaming. If there were Formula One Fishing, this lot would have been heading the pack.

With the image fixed in the mind's eye, we were still chuckling when we reached the hardware place. And the memory soon turned too inspiration: at the precise we were presented with the door, fixed inside a frame, blowing it out to 36 inches wide, and 6 inches deep, AND the several solid hunks of framing timber. Our aspirations were met with bemused looks on the faces of the two guys working out back loading hardware into Dodge Ram Trucks and the like.

I suggested that if we put the door in first, with the door itself to the bottom and the frame opening facing up we might be able to load the timber into the available space and have it sticking out over the end of the frame, somewhat skywards of the Mustang's roof level. The lads in the loading bay reckoned it was possible, but the way they said it did not inspire confidence that they actually believed what they reckoned. They were more than ready to assist, however. One said that if we drove slowly and watched out for the bumpy parts of the road around Curling, and that if “the authorities” were in another part of town during the next hour or so, we might make it.

By the time the stuff was loaded, the Mustang Utility Vehicle was doing a fair impersonation of a Dash 8 airplane tail section profile. If we'd nailed one of the timbers at right angles to the apex of the load there'd have been little in it. The yard bay lads found us a bit of strapping to add to our assorted ropes and bungee cords, and they came to light with a couple of lengths of day-glo orange ribbon, which they attached to the end of the load. We ran some rope from the trunk catch round the back of the load and through the car to the passenger seat. Three times round the seat and back again to the end of the load and, finally, back to the trunk latch, completed the exercise—that is, apart from the second rope trick, involving the trunk spoiler and the load itself.

The water skiing had ended by the time we crawled back through Frenchman's Bay. And "the authorities" were, indeed, passing time some place else. In this wonderfully un-normed part of the world no one really seemed to even blink, and the cars following showed admirable faith in our packaging, being quite happy to sit reasonably close in behind until there was a chance to pass. I'm not even convinced the officials would have seen it that much differently, had they happened upon us en route, but was nonetheless pleased not to have to put that hunch to the test. But it stands to reason that wherever a fishing dory can morph to a high speed pleasure craft, a Mustang Utility Vehicle might be excused for imitating the aerodynamics of a Dash 8.

For the record, the aerodynamics were pretty good. 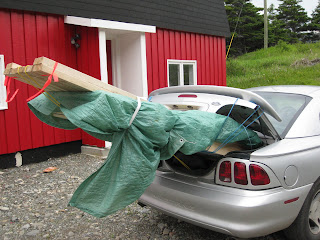 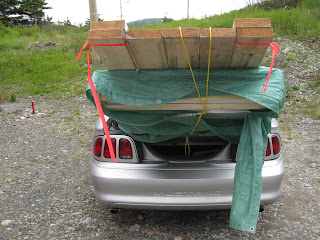 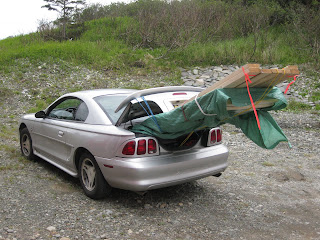 Comments:
If you are looking for a utility vehicle for the purpose of travelling or transport then plenty of ways where you can find it.