Travellers' Tales: Streetart into Cyberspace ... and Back Again

Julia Davies is speaking this morning. She is focussing on online spaces, the city and the people who interact with and across spaces. (View her slideshow here.)

Julia talks about her use of Flickr and how she began using Flickr when uploading photos to her blog wasn't automated. She ended up finding that Flickr itself to be very compelling. Gradually, she began titling her photos in her Flickr archive, and then adding tags. People began commenting on her photos and Julia began developing her use of tags even more so that people could more readily find her pictures.

She talks about folksonomies and how tag clouds these tell you much about the values of a group (keeping in mind that Flickr itself has censored the tags that are "counted" within their tag cloud; such as excluding rude words).

Julia talks about how she spent many hours looking at other people's photographs and how certain sets of images--such as "sugar dudes"--really captured Flick-ites' imaginations. People began discussing these little cakes in the comment threads below these images, and then talking about their birthdays and their life in general. Julia and her husband decided to go and liberate the "sugar dudes" and met up with other folk in the group in New York City. 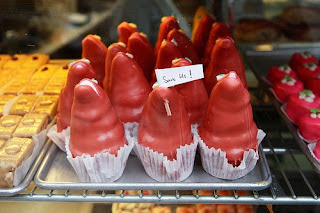 The group documented the escape of the sugar dudes from the shop including the untimely death of one sugar dude under the wheel of a passing taxi.

Julia discusses how another Flickr user in Scandinavia enacted a similar event, and travellers from Sheffield--where Julia lives--on their next trip to New York City bought sugar dudes and took them to the same bar for drinks that Julia's group had.

Julia talked about how carefully everyone in the sugar dudes affinity space who met up online had clearly been reading each person's pictures and comments in order to evaluate the extent to which they could trust each other. She also paid attention to the ways in which people inserted hyperlinks into their comment posts and how these, too, added to the internetworked cohesion of the group.

Julia talks about another Flickr user, "Luna Park", and a list of testimonials posted to Luna's profile and how they endorse her as an expert on finding street art and helping to organise street art excursions etc., especially within New York City. Julia displays Luna's street art photo sets. Julia also discusses Julia Supine's photos and one set where she has taken photos from disparately placed in the real world into a new space so that they take on different meanings when placed together in this way. Julia Supine has also geo-tagged her photos, which shows the location where each one was taken etc, and displaying her expertise as a photographer and archivist.

Julia also talks about a portrait of Luna Park that was painted by a friend on a peice of found wood, and which was later placed back out in the street as a peice of street art--moving and mixing identity and space in very interesting ways. Luna Park is a librarian in the physical world, and has constructed a Flickr identity that is highly interactive through comments thread, her work to build up a group with similar expertise to establish a solid community within Flickr and working out what this group does and does not value.

Julia links Gee's concept of "presentation og a particular self" and his notion of a "projected identity" to the identity work that gets done on Flickr. Her definition of identity is drawn from Rebecca Black's work: "being recognised as a 'kind of person'.. within a social context" (2008).

Julia problematises mythic conceptions of identity erasure online, and explains that most people *do* want to be known as a person of a particular kind online and often work very carefully at crafting the identity they present.

Julia discusses the work of Elbow-Toe and the work he does in painting portraits of friends on walls etc.

Streetart as a New Literacy
Julia talks about the subversive streetart work of Banksy. His work is usually political commentary. He works anonymously and his identity is really only known through his artwork.

Julia defines street art using Schacter's work and explains that it's more than simply graffiti, but can include assemblages as well. She explains how she herself is not interested in whether streetart really is art or not, but in the phenomenon itself. For Julia, not all streetart fits the "new literacies" label, but some does in terms of being a new literacy practice. she's interested in the ways in which stretart cn produce new spaces within which to act.

Julia uses the concept of "memes" as contagious ideas that are replicated and passed from mind to mind, with robust memes having longevity and fecundity. this concept helps to explain how streetart is often shared, circulated, replicated etc.--especially online. Banky's "This is not a photo opportunity" stencil has been remixed, distributed and become part of a community thread narrative (e.g., stencilled onto a rubbish bin, sprayed onto a war monument). these shared memes work like hyperlinks to link together disparate people and places. People's take-up of this meme adds to and extends the meaning of Banksy's original streetart.

Streetart: Narrative
Julia talks about a particular image of a stencilled "This is not a photo opportunity" that has been erased and re-stencilled many, many times, as well as talks of photos of old, almost disappeared signs. She talks about them in terms of "palimpsest" and how we write-over texts with the original texts nonetheless still visible.

She talks about the provenance of streetart--poaching the term of typically talk about "high art"--and how it comes to acquire a rich depth and breadth of meaning and how many pieces--especially Bansky's work--themselves become iconic within people's travel photographs.

Julia draws on Highmore's work to discuss city spaces and how histories accrue for urban landscape photos posted online by how they are taken up, commented upon, linked to, and the like. she exemplifies this with the Flickr group "Banksy - The Complete Works" - to which anyone can contribute, but no duplicates of his work can be included. The collection is therefore curated by a widely dispersed body of people and brought together within this Flickr group. Other people interested in Banksy's work have also mashed up images of is work (e.g., Banksy - Barely Legal) and posted these to Flickr. This last image "belongs" to a large number of different groups, too, which adds additional layers of meaning as the photo appears in different group sets of photos and thus new contexts.

Julia talks about the gentrification of New York City and how local people are often being driven out as real estate is being bought up, and street artists are making their own comments on walls and suchlike. This is a space where speech becomes writing
and creates opportunities for making all kinds of social comments. These images and comments when uploaded to Flickr can continue this commentary in a rang of ways.

In closing
Julia closes with a discussion of how street art can be seen as an "attempt to embody themselves into the very fabric of the city, to smudge the landscape with the stigmata of personhood" (Mitchell 1994).

BTW it is Judith Supine, and he can be seen at work in this video which illustrates his audaciousness