This session focusses on key things that seem to spark memes online, and is being moderated by the very funny Anil Dash.

Anil asks Drew Curtiss about how his site gained momentum, and Drew explains that there was no real point at which traffic increased significantly, apart from the time when they were mentioned in Playboy.

Matt talks about how the Metafilter crowd really rallied around unmasking a hoax cancer-victim site. this unearthing work was picked up by time magazine and a bunch of other broadcast media.

Alexis speaks about how Reddit was there at the beginning of key memes, like xkcd (Randall Munroe). The second one was Yahtzee and his video game reviews.

The panelists commented on how they went about designing their sites. Matt Haughey, for example, based Metafilter on Slashdot and on thing he didn't like bout that interface. It took him 6 years of running Metafilter before he could make a fulltime living from it. The Overclocked Remix lads commented on how they don't make a money off their website, and can't see it becoming a fulltime job. But they are starting to break into the field of making soundtracks for games. One of the things they're working towards is working on distributed and collaborative creation of video game soundtracks.

Anil Dash asks about the things that tend to attract positive comments on Metafilter. Matt talks about how it's the negative comments that tend to come to his mind first. He suggests that obsessiveness is always popular on Metafilter (e.g., a thousand photos of barns etc.). Anil Dash asks about whether conspiracy theories tend to "big". Alexis comments on how Ron Paul related posts have been popular, although the Ron Paul posts tended to divide the Reddit community.

Anil asks how the panelists would change the character of their communities, if they could, what would they do. Drew Curtiss says he enjoys his site just the way it is. Alexis talks about how th community keeps them going, while also keeping them humble. Larry talks about how he'd like to see more diversity within their community, with respect to the kind of game music that gets mixed (i.e., beyond Mario music). He wishes that using popular, lowest common denominator stuff, isn't always the best way to go.

Anil asks whether the respective communities take after their creators; Drew felt that his community very much is in keeping with who he is, while Alexis hoped his Reddit community *wasn't* like him.

David talks about how they recently submitted an album of Fighting Fantasy remixes to Fark, but it wasn't selected for posting. On the toher hand, it was picked up by a big site in Japan and is doing well there.

Anil asks about cross-pollination of readers and overlaps; Drew talked about a cse whether someone asked on Reddit what "Fark" was, and someone wrote a summary of it nd posted that to Reddit. Fark picked up on the summary and poked fun at the whole thing; and then Reddit posted about the Fark discussion....

Anil asks about other real world effects brought about by the panelists' respective sites. Drew talked about how he tried to manipulate the stock market through a post on Fark--but with absolutely no success. Alexis talked about the case of the Reddit community mobilizing and saving some whales after banding together to vote for "Mr. Splashy Pants" as a name for a whale.

[Laughing here; the panel has just been rick-rolled!] 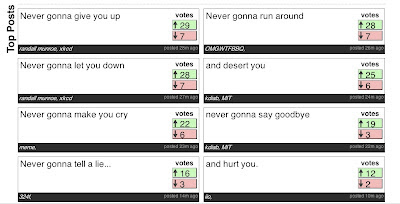 A question from the audience asked whether the panelists felt they were in competition with each other. Drew Curtiss talked about how there's not really any competition on the internet. It's not like broadcast media in the 1970s. He explained that he keeps up=-to-date with everything via submissions and suchlike. The others agreed that they weren't in competition. Matt talked bout how he built Metafilter for himself and that still suits his purposes. The Overclock lads talked bout how user comments kept them up-to-date with key things.

David Pretzel talks eloquently bout issues concerning the grey areas to do with copyright and computer game remixes. the case of Timbaland using computer game remixes with no credit whatsoever is a really thorny issue within the computer game remix community right now. Drew talks about how broadcast media is using Fark for material; for example, the Jimmy Kimmel show has a bloke whose fulltime job is to read Fark for ideas for the show. Matt talks bout how participants don't seem to worry about being quoted without attribution in the New York Times. What *does* bother him is when people buy domain names with spellings close to "metafilter.com" and fill it ith ads and crap.

A question from the audience asks about the effects of in-jokes as something that builds community, or whether it's just wankery. Matt talks about how in-jokes are typically funny for one week, but after that get pretty tired. He talks about how some jokes even become a kind of jargon that ends up not being funny or exclusionary.

A question from the floor asks the panel about hether they should be mroe "local" in reach. Drew talks about how he pays attention to sport in englnd and politics in Canada. He talks about how living in Tennesee -- what he called a "fly over state" -- helps him keeps a good perspective on things (e.g., how much crap is broadcast live out of New York City). The Overclocked lads talked bout how they are actively working on videos in multiple languages. About 40 percent of the traffic on Reddit is from outside the U.S., but they have been actively working to attract a global audience.

Anil asked whether the panelists feel that anyone can create a meme within their communities, or whether they are more about being supporters/conduits of memes. Everyone seemed to agree that any one of them could create a meme, but probably not intentionally. Alexis tlks about how many memes seem to start with someone thinking of a cool idea snd throwing it up online to see what happens.