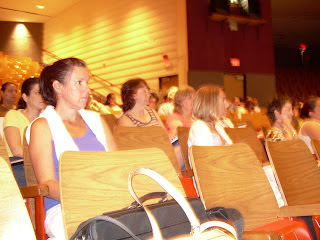 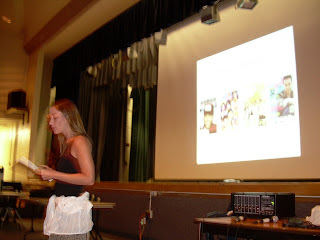 It's a happy week. We are working with Rebecca Black and Jim Gee in Toronto. Rebecca is just about to do her keynote to start the day. The context is a M.Ed course where the participants attend the keynote at the start of the day, and then go into a 90 minute discussion of the keynote. After lunch comes a three hour workshop in which folk jump into various Web 2.0 applications, drive them for a while, and discuss whether they think these applications can be put to useful educational purpose.

Yesterday I looked in as some of Michele's group were making moving movies using Google Earth, picking up on aspects of identity and tracing them through place. Andrew and Kiki located their homeland locations in Greece, tracked some locations and dropped in some Greek music. Not rocket science, but a very fast and effective way to build up confidence in teachers around using new stuff in ways they learners in classrooms might pick up on.

Jerry Harste is introducing Rebecca right now. Reb will talk on "Learning via New Media and ICTs", and there is a high level of aniticipation.

... The emphasis is fan fiction, Rebecca's research specialism. Interestingly, the rapport is so good that the audience felt free to begin asking questions just 10 minutes into the talk. It's easy to see participants making big connections early on. Makes me think how crappy our undergrad teacher education programs so often are. This stuff should be routine literacy education experience for teachers in formation.

Still, having the chance to get it during inservice Masters programs is not too bad. And to be able to get it from the best, in a school auditorium in Toronto, as enrolees in a course offered by a small university located in Nova Scotia is, in my view, pretty good.

I'm hoping the iPod recording will come out well because it will make for a pretty good resource.

Reb's a dear old thing, looking for every opportunity to relate what she is saying to the tired old general overview talk I gave yesterday. It's so *handy* to have great concrete examples following so closely upon a talk -- 24 hours is close enough for the connections to stick. Thanks, Rebecca.

Question time now, with a participant noting the changes she observed in a university library around use of interactive technologies compared to the previous time she had been in one: a nice marker of shifts across a short period of time, and how much it had taken her by surprise.

One motif we have adopted for the course involves a temporal shift on the old Jane Kenway and Chris Bigum principle of "Teachers First". We have modified that a little to "Teachers Too".

Lovely response to a question about authorial sincerity, with Rebecca referring us back to those old classroom chestnuts like writing fromt he standpoint of being Benjamin Franklin's pen.

Definitely one of the funnest serious teaching weeks we've ever been part of. Nice work. Thanks Andy.

Comments:
After Rebecca's talk we discussed several key issues. To read about these go to http://harste.blogstop.com/