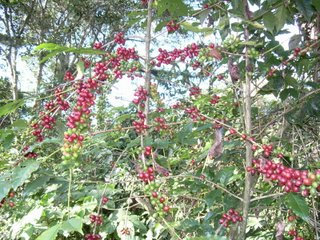 Comments:
Crikey! Interesting stuff. What other crops are grown in the area? What are economics of those 'other crops' we have come to know?

I reckon the story for sugar and bananas runs pretty much in parallel with the coffee, Scott. I'll give the sugar a miss, but will plant a few bananas about the place, and the odd papaya. Mind you, this seems like sheer fantasy from behind an office desk closing in on midnight on a Friday evening. Still, dreams they say are free.

We live between Coátepec amd Xico, just outside San Marcos. We have been here a year. The previous owner had chopped down all the coffee and we let it grow up, so we have small harvest this year for our own use. We are very interested in the whole problem of coffee. It is in the hands of the giant companies now, and is apparently second only to oil regarding the size of the business.
I have a blog, too, on our lives here. It is at bakirita.blogs.com/xico

hello Esther, love your blog. It's making me even more homesick -- as I sit here in Cairns, Australia, earning my daily bread in an office with a cyclone warning just posted. You captured Christmas beautifully, I thought. Mexico has an uncanny way of turning westernized alienations inside out and providing intense experiences of how life can be. We're now in our 8th year of Mexican residency -- the last few have been tragically part time, but that is about to change. Was/is Ursulo Galvan a sugar mill? I am trying to place it on the way to Xico. You wind down to the narrow bridge by the old abandoned factory, right, and then up the other side. How far toward Xico from the little narrow bridge in the dip is Ursulo Galvan?