If your mother was anything like mine when it came to trying to shape up good choices in her children, she likely informed you numerous times that while "you can't choose your family, you can choose your friends." As the years rolled by I became increasingly absorbed in the thought that neither can you choose your country of birth. That's every bit as much a lottery -- for the same reasons, I guess -- as what you end up with in the way of family.

By the time I had completed the sabbatical referred to in the previous post I was acutely aware that I really wanted to be some place other than New Zealand. And I am sure that at some point in their lives a very sizable proportion of people arrive at the same idea: they would like a chance to live in another land. Moving as I did to Australia for a few years -- until a laughable work situation made fleeing not just a good idea but an absolute necessity -- doesn't count because New Zealanders at that time got Australian residence pretty much automatically: a reciprocal arrangement between the two countries.

But when we decided to head for Mexico we were faced with the need to apply for residency. There was no assurance of getting it, not least because the only work we had at the time was some contract research student supervision kindly organised for us by Chris Bigum out of Central Queensland University. We would have struggled to meet the economic requirements for entry on the small amount of 'wealth' we possessed at the time, and we had no job in Mexico. Eventually,we found an immigration lawyer, who has become a lifetime friend, and thanks to having published a few books we managed to get a toehold. An FM 3. And after several years more an FM2. And, for me, finally, my treasured permanent residency card.

I simply cannot envisage ever wanting to leave Mexico, and I hope I never have to. This is the first sense of home I have ever experienced at the kind of level that makes it feel like a real privilege to be able to pay taxes in return for the right to live in the country! I simply love living in Mexico, and I love being a permanent Mexican resident. It took ten years and a lot of running around on hot days, but I treasure my Mexican residency with a passion and a sense of pride that goes beyond words.

A couple of days ago, in the company of some very dear Mexican friends, I found myself in the Lagunas de Montebello National Park for the first time. Right on the border with Guatemala. I had no idea upon arriving at the first lake on the guided tour that the border was there. The guide just pointed to some stairs and said "the first lake we will be seeing today is at the top of these stairs, so let's walk up there and take a look".

We got up to Laguna Internacional and all of a sudden I saw a sign: 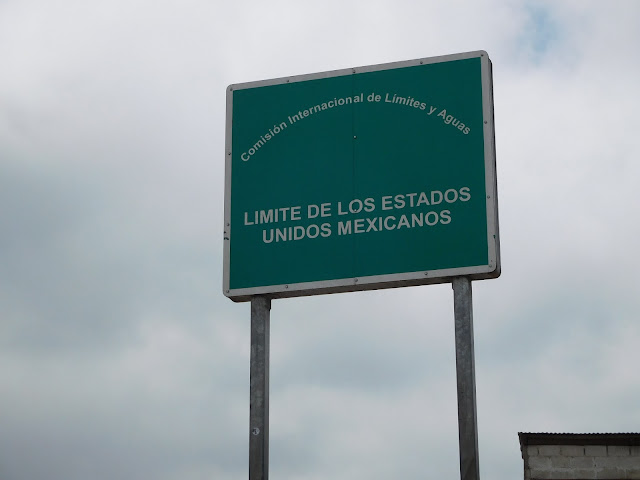 Directly in front of me, a few meters away, there was another sign: 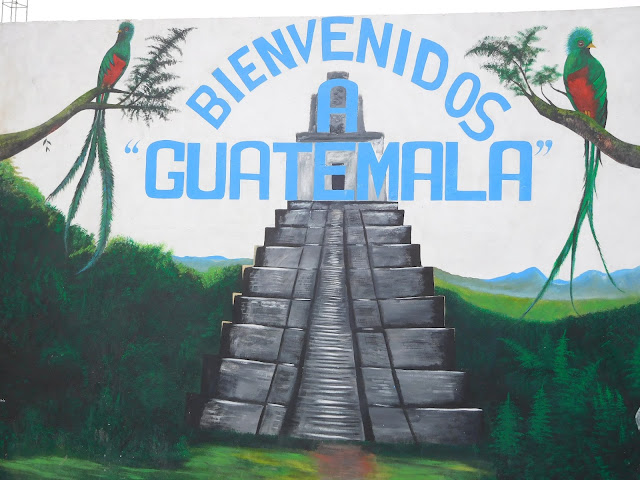 I walked toward it, looking at a tiny road leading off to the left hand side, and a track further to the left winding up the hill. I thought one or both must be the way to the border. So I turned round to ask the guide and, in doing so was met by another sign indicating the limit of the Republic of Guatemala: 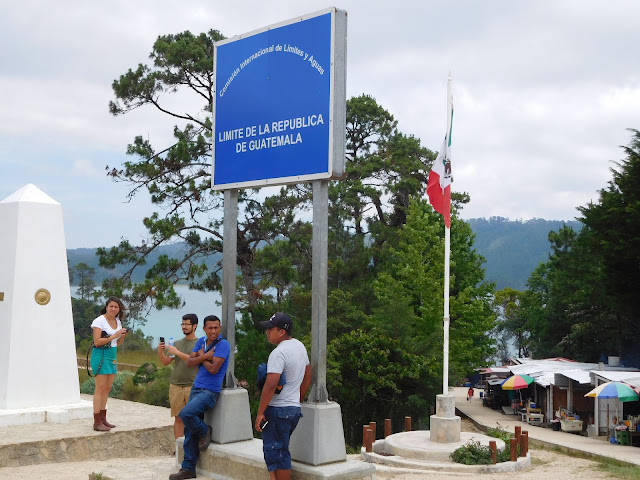 I asked the guide where Guatemala began, and he said "you are in Guatemala". He pointed to a concrete strip that came out from the base of the white pillar in the photo above, right by the feet of the muchacha standing there. "That is the border", he said.

So I asked "then where is immigration and customs?" and he said "that's at another place quite some distance from here". Another question followed: "Then what is to stop people just walking across the border?". He replied "Nothing. People do it all the time. Those people in the stalls there selling chocolate and crafts, many of them are Guatemalan. They come over in the morning and go home at night. Many people come here to look for work because they can get more for what they earn."

I found myself just walking to and fro across the border, numerous times, just soaking up the feeling of complete freedom of border crossing. It felt so good. I have long thought how wonderful it would be if people received as part of their birthright one free shot at living where they wanted to live, given that you can choose your friends but not your country of birth. A silly, naive, unworkable thought, to be sure; but one that generates a good feeling when I think it.

I looked across the lake to the well defined cutting that marked the border, musing about it just being there, completely open and completely porous. 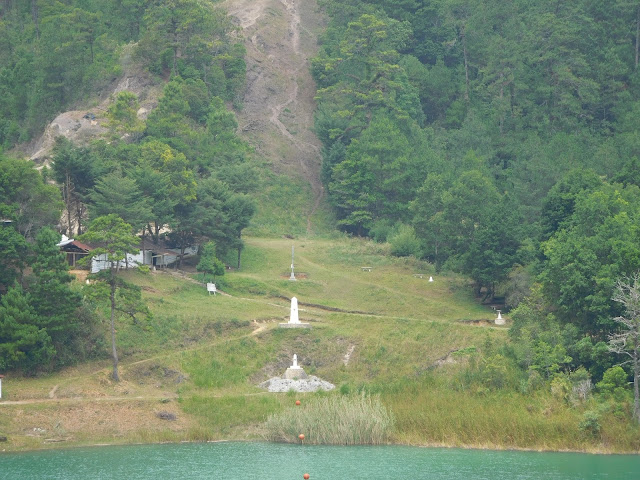 I appreciate that there are lots of places in the world where borders are porous and 'free' in this kind of way. This one just happened to be the first one I had experienced.

The guide liked to throw in the occasional word in English and I asked him if he had ever been north, to the US. He said he had. He'd worked in construction in Atlanta for a couple of years, and loved it. But he had no papers, so "I had to come back here". He just said it matter of factly. He was illegal, he knew it, there was no hint of resentment. He'd had a shot for a couple of years, and he was very happy to have had the experience. Would he like to go back? Absolutely, but there was no chance.

I walked back and forward across that border line several more times, savoring the feeling and the symbolic significance. I wished it for my guide.

Later in the day, after returning to Tuxtla Gutierrez for my overnight bus back to Veracruz, I was in a cab to the bus terminal. The cabbie asked where I was from, and I said I was originally from New Zealand, but my home is Mexico. I was a permanent resident and intend to live the rest of my life here. And that I work part time 25-30 days a year in Canada, and would continue to do so for as long as there was work and I could get a work permit. He said that he had worked as a security guard in Iowa, "by Nebraska" he added. "But I didn't have papers so I had to come back." He expressed exactly the same sentiments as the laguna guide had earlier in the day. He'd only managed one year, but was so pleased to have had the experience. He'd obviously crossed at some border point that was reasonably porous. When the axe fell he returned to Mexico, to limited work options and low earning capacity. Would he like to go back? Absolutely, but he saw no chance of that.

There was a bit more than usual to think about on the 12 hour bus ride home. That included a renewed sense of gratitude for being extended the opportunity to find my home in Mexico. They say that home is where the heart is. I know that at some point pretty much every day I am going to feel my heart almost bursting with the joy of being able to call Mexico home. The joy and something very close to the kind of love one can feel for other people and for pets. Mexico is like a friend for me. Like I would like to grab it into my arms and hug it as I would a loved one.

And I sometimes wonder what proportion of people in the world could honestly say that about where they live. I hope the proportion is high, although I guess I doubt it.

Analogue cooking: with apologies to vegetarians

During the one and only sabbatical I hung around the university long enough to qualify for I saw an unfinished prototype of a solar oven. It had been part of a suite of appropriate technology ideas a Belgian engineer introduced in the area of the Nicaraguan countryside where I was living and studying everyday life. Jan Haemhouts had fled Haiti, where he had been working with poor rural communites, barely escaping with his life and what he carried in his head. He introduced the prototype of what has become the renowned Nicaraguan Rope Pump, with a view to making it easier for women and girls -- the principal drawers of water in the countryside at the time -- to meet the family's water needs day by day.

The rope pump took off on a major scale.

Jan tried to push the solar oven as a low cost technology to alleviate the health risks for women of cooking by fire in smoky kitchens as well as on the obvious ecological grounds. In the area where I was living the landscape was largely denuded of trees, which went for firewood and for making carbon. The solar oven was as unsuccessful as the rope pump was successful. During the 18 months I spent in that area I tried several times to encourage the men working in broom and mop and rope pump production to work with me and complete te oven, and give it a road test. The response was always the same: there's no point, no one will use it.

I vowed to myself that one day I would build and use a solar oven, but the other things in life -- especially writing -- always seemed to get in the way.

Until a couple of weeks ago, when I had finished off most of the work I've been doing to create a small garden and some serious living and hobbying space on the roof. Since the roof was the most obvious place to get maximum sun, getting the most of the work completed meant there was every incentive to finally see if solar cooking on the roof might be a viable proposition.

I found the version I wanted to start with and set about finding the materials -- including getting sheets of 2cm thick polystyrene from a nearby stationery shop.

This morning I got the oven finished, as near as I could manage to the specs of the plan I had used. It was a most enjoyable building task, and the local supermarket had the kind of black enamel pot recommended for cooking. 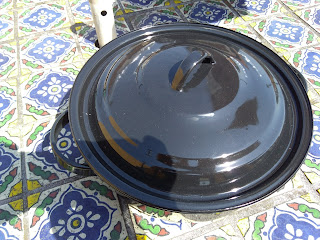 I put a little olive oil on the bottom of the pan and loaded in some chicken pieces, which I thought would be an indicative place to start. 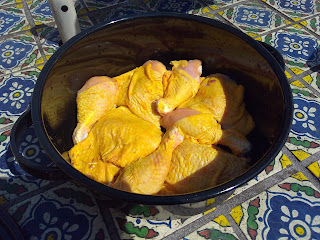 Then it was time to load up the cooker. 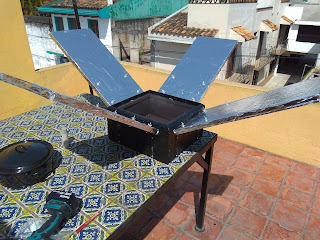 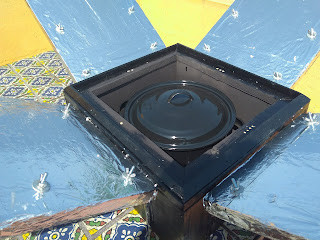 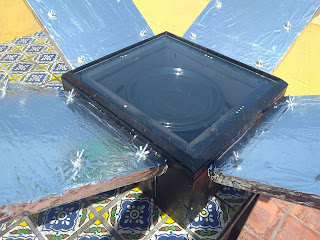 With the glass set in place the thing was good to go.

I gave it 5 hours, hopeful that it might work out well, but quite prepared for a less than optimal result. As luck would have it, the oven worked a treat. 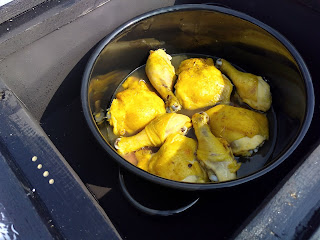 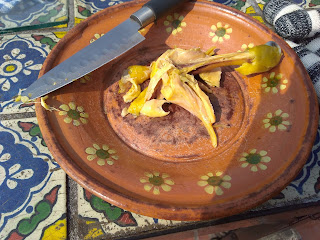 The juice created by the slow cooking process will be used tomorrow as stock for a simple chilied vegetable soup. 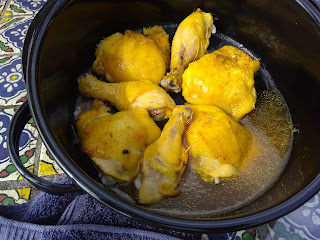 The next thing will be to look out plans for a larger model for future use out on the coffee land. I am very happy with the initial result, and am hoping for another good sunny day tomorrow and for equal success with the soup.