Waiting for the Chromebook

Spent much of yesterday chasing the buzz around the imminent release of the Google Chromebook neatly hyped up here.

I've been looking to upgrade my almost obsolete android tablet and, naturally, had my eyes set on a Motorola Xoom, with a thinly disguised hankering to lift one over summer whilst north of the Rio Grande. At the same time, I've been broken-recording Michele for a year or more now asking out loud "When will Google release a computer running their own OS?".

For those with a bit of coding finese and a spare netbook or laptop lying around, there last been the option to copy the open source Chromium OS to a thumbdrive and install it -- maybe with a bit of instructional assistance. For a relative klutz like me that looks like a challenge I might be able to manage.

However, as one commenter on Reddit said, the easiest way to get the experience of contemporary cloud computing will be to pick up one of the Chromebook models available after June 15 in 7 countries -- including the US, but mostly in Europe. Basically, the Chromebook will be pretty much cloud computing -- as a British open source guru, Simon Phipps says the Chromebook is not a Linux laptop but, rather, what Oracle, Sun and others have tried previously and failed at: namely, the network computer -- everything in the cloud. There will be some necessary offline capability -- such as for gmail and document processing -- but to all intents and purposes it will all be on the internet. No anti virus, patches, etc. Pretty much like everything on the same kind of level as "doing google docs in a browser" and having it all "there" rather than "on the machine" -- warts and small print and all.

The Samsung Series 5 models will come with two options -- wifi only and with a 3G connector. The Acer model looks like it could be wifi only. With price tags between US$399 (Acer) and $479 (Samsung wifi + 3G), it is not surprising that some Reddit commenters are saying it's overpriced. At the same time, the live blog account of the official launch of the Chromebook concept makes me see a bit of potential history here -- something I am prepared to overpay a little for in order to experience it from the start.

I have a sneaking feeling that there is going to be something significantly different in the feel of this kind of computing from anything I have previously known as a latecomer (end of the 80s) to computing.

As luck would have it, we'll be in the US during the first few days of sale, en route to Canada, and hope there will be enough of a window to get one and muck around with it over the summer. Initially it won't be in Canada or Mexico, although the UK, France, Spain, the Netherlands, Germany and Italy will join the US at the outset -- with the others following downstream. As Simon Phipps says, maybe the time of the network computer has arrived???

I've had my 73 Triumph Daytona over here in Mexico since we first arrived, but it's always been a struggle to keep it street legal. During recent years, however, importing vehicles has become more common, and latterly the challenge has been more one of time than of law. Time, mercifully, is sorting itself out. The missing link was a connection, and thanks to this year's Waitangi Day celebration in Mexico City, the connections are coming. We met David at the celebration and this week he very kindly introduced us to a local British bike enthusiast, Rafa. Rafa was formerly a vet but finds bikes more vital, and so he and his brothers are in the bike repair, servicing, spare parts, restoration and (more generally) "let's keep bikes running well, especially classic bikes" game. The Daytona needs some light work, which Rafa will do. And he will also be helping get her some Mexican plates.

At the same time David got us sorted with Rafa he got us introduced to the Motos Antiguas club here in Mexico City. The first Saturday of each month the club meets at an outdoor restaurant, and so we made our way there, had breakfast, and met some of the local members. There were bikes, scooters, mopeds, and even restored vintage bicycles there. The club has grown to over 140 members and is wonderfully open. All comers and all machines are welcome. 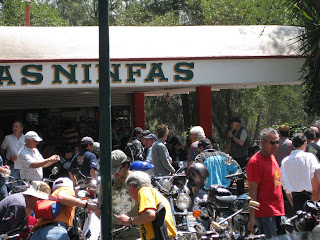 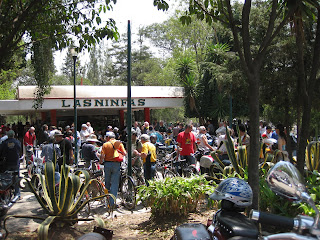 The oldest member is now over 90 and these days rides a three wheeler. 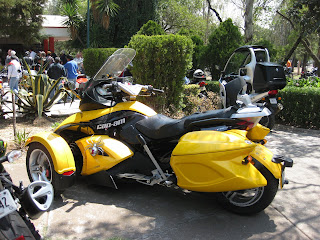 My favourite classic bike there was a gorgeous early 70s Triumph Bonneville T 120. Beautifully maintained, it caught the sun nicely, and a front on shot recalls just low lean some of these classic bikes were. 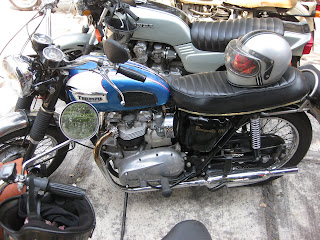 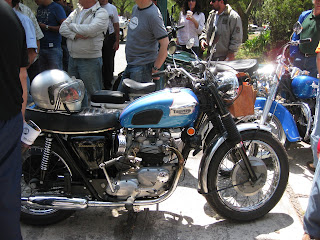 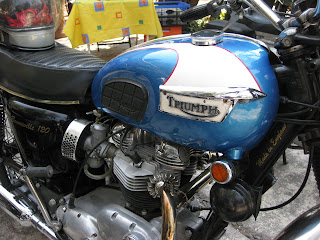 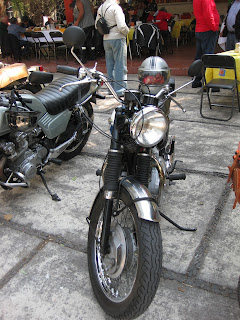 There were plenty of Harleys, old and new, as well as new Triumphs, and a very nicely maintained pre-unit Norton. Some bikes had side chairs -- there was even an old Russian Ural with a side chair, but it had gone before I got the camera out. 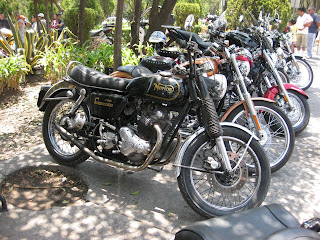 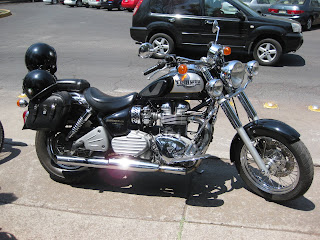 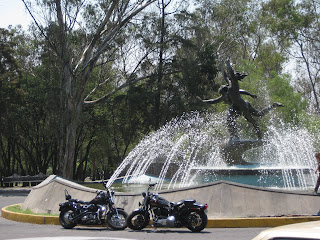 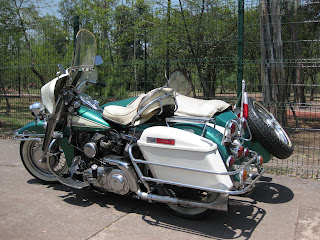 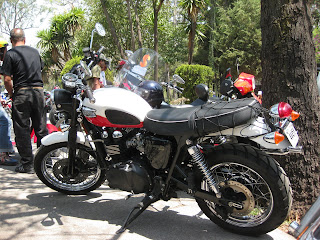 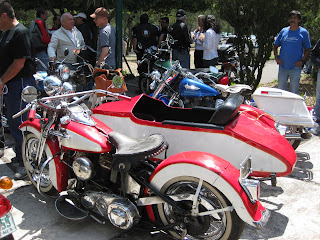 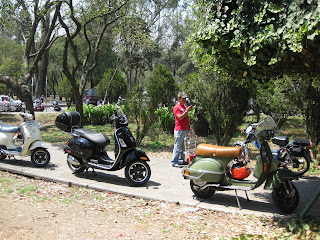 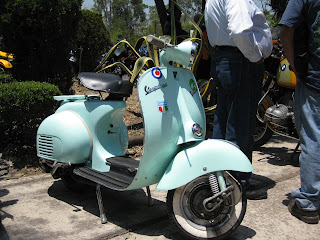 We met a guy who had ridden from Mexico City to Tierra del Fuego and has written a book on the first stage of his trip. While I was looking at the book David had bought it, so the next round will be on me. I'm long overdue for revving up my Spanish, which is well done by reading. The trouble is always finding material that will engage me enough to stick at it. This book will do the trick nicely.

The monthly club meet will become a calendar regular. It's a class act.

This is a call being placed by JuliAnna Avila and Jessica Zacher Pandya for chapter proposals for an edited book for submission our New Literacies Series with Peter Lang. We're lending them a hand here with getting the word out--so contact the dircetly (see below) rather than us if you're interested in contributing to this collection.

From JuliAnna and Jessica:

The contributors to this edited volume will examine the simultaneous implementation of critical and digital literacies and explore ramifications for the development and assessment of critical digital literacy (CDL) curricula across educational contexts. Critical literacies, as we conceive of them, encompass curricula, pedagogy, and assessment; through them, we analyze printed texts, discourses, popular culture, media, and subject-matter content. A critical literacies approach to teaching and learning, then, is a way to talk and think about students as knowledge-holders and producers, and a way to talk and think about teachers’ pedagogical practices. The theoretical framework undergirding this approach is well-established (Comber & Simpson, 2001; Fehring & Green, 2001; Freebody & Luke, 2003; Janks, 2000) and although scholars caution against assuming a standardized approach to critical literacies in practice (Iyer, 2007; Stevens & Bean, 2007), many educators around the world have added to our understanding by describing critical literacy activities in their own educational contexts (Behrman, 2006; Boran & Comber, 2001; Dozier, Johnston & Rogers, 2006; Fisher, 2008; Lewison, Leland & Harste, 2008; McLaughlin & DeVoogd, 2004; Morrell, 2008).

Recent research has highlighted the need for educators to bring digital literacies into our classrooms (Alvermann, 2010; Alvermann et al., 1999; Jenkins et al., 2009; Paris, 2010; Rance-Roney, 2010; Robin, 2008;) even though traditional school definitions of literacy may well be at odds with definitions that include digital dimensions (Collins & Halverson, 2009; Tarasuiuk, 2010). Digital literacies have called into question our understandings of literacy acquisition and development, and of authorial authority (Lankshear, Peters, & Knobel, 1996) even as schools continue to hold onto more traditional, and decidedly less digital, definitions of literacy. Along with Dockter, Haug, & Lewis (2010), we theorize that critical digital literacy (CDL) has the potential to reach learners who might be otherwise reluctant to engage in print-based critical literacy work. CDLs provide opportunities for students to critique the cultural worlds they inhabit (Gainer, 2010) and to expand their understandings of culture (Myers and Eberfors, 2010) while also revising their own literacy and academic identities using digital tools (Lankshear, Peters, & Knobel, 1996; O’Brien, 2003).

o    What would it take to make CDLs more valued in schools?
o    What is negotiated, gained, or lost in the process of combining the critical and the digital?
o    Where is the power located—and who is silenced, and how—in CDL approaches?
o    Do children and adolescents today even need CDLs in the ways we currently conceptualize them?  If so, what do they need from them? If they do not—if youth are already critical consumers and producers of texts, as some have begun to argue—what kinds of CDL projects might supersede or replace current approaches and assumptions?
o    Can CDL practices disrupt classroom routines in constructive in engaging ways?
o    How has the divide between audience and participant, and the notion of collective intelligence, been challenged and redefined by CDLs?

While the primary focus of the proposed book is on educational practice, we also invite chapters that address the philosophical foundations of, and social justice issues related to, critical/digital literacies. We also aim to present a balance between current issues and promising future opportunities and directions.

Please note that we only need a tentative chapter title and a brief abstract (approximately 200 words) by May 28th for preliminary submission to the series editors Michele Knobel and Colin Lankshear.  We may ask for more detailed abstracts after review.

Editors will select contributions for the collection, notify authors, and then send additional details. To submit a proposal, or for further information, please contact the editors.