Sometimes it's a challenge to find ways to pass time on planes, but I have to confess that on numerous occasions I have been saved by locating a current copy of the Skymall catalogue. On several occasions this has resulted in making a purchase and, as the saying goes, so far so good.

On a recent trip I saw some tiny red "boom" speakers in the catalogue, but forgot to take the latter with me when I left the plane. I remembered the speakers were called "tweakers" and once back on terra firma I found that amazon had them, and Michele's one click purchasing -- everyone knows *I* am not the consumer -- soon had the request in process. (I felt bad about not getting them from Skymall, but convenience won out on this occasion.) 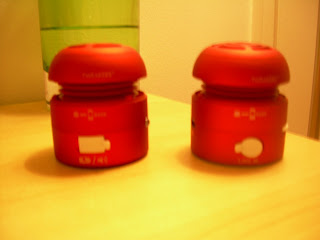 The tweakers turned up yesterday and I lost no time in connecting them up to my wee Creative Zen player -- the one that is the exact same size as a credit card. They play a treat, and the entire system -- Zen + Tweakers -- weighs about the same as my Zune player alone (or, say, an iPhone), give or take an ounce or so. 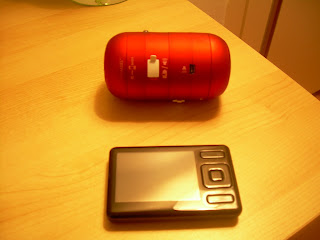 Even if the sound were not so good I would still love the set up for its sheer convenience and elegance. The Zen runs an SD card as well as the hard drive. The card functions as a standard drive, which means you can load music file folders to it without having to go through all that corporate nonsense of iTunes or Windows Media player. Just dump the folder, give it a name, and it shows up intact and good to go. I rarely use the player's hard drive these days; just carry multiple cards of suitably formatted material.

As for the tweakers, they run on a rechargeable lithium battery and come with a USB adapter for easy recharging. They have retractable cables for connecting the speakers to each other (which also serves for recharging the battery), and for picking up the sound from whatever device you want to play from. The speaker bases are magnetized, and the speakers clamp together and, with a twist, stay together, inside a tidy wee drawstring carry bag -- think: two egg cups end to end. The speaker tops twist and untwist to "spring out" and "go back in" before and after playing, so that you get the necessary conditions for a decent "boom". 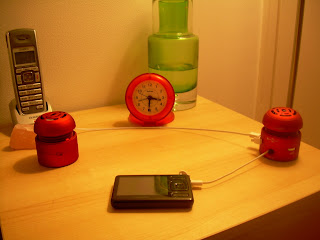 At between 2 and 3 hours of play time per charge I reckon these will get a lot of use.